Undoubtedly, the most progressive efforts in North America to reduce air emissions can be found in California. With the California Air Resource Board’s (CARB) goal of five million zero-emission fleet vehicles by 2030; the addition of tankers and auto carriers to the At-Berth Regulation for ocean-going vessels; and a proposed amendment to the existing Cargo Handling Equipment regulation to transition to zero-emission equipment, California is setting a high standard to which other North American ports will have to follow.

The recent partnership between SSA Marine, the Port of Stockton, XL Lifts, World Forklifts, and Wiggins Lift Co. for 36 new zero-emission forklifts is a good example of how success can be achieved in meeting the zero-emission goal. “Our leadership team and environmental department continue to leverage innovation and forge new partnerships that make projects such as this possible,” said Port of Stockton Chair R. Jay Allen, adding that the Port of Stockton has also deployed two multi-functional utility vehicles and a railcar mover to assist with emissions reductions. 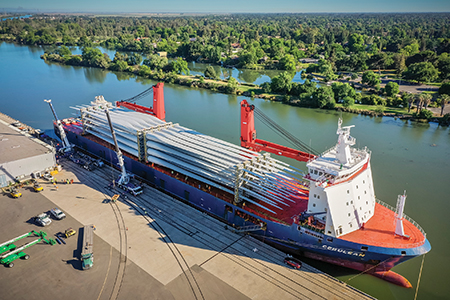 SSA Marine’s operations at the Port of Stockton are well-suited for the Wiggins electric forklifts.

For decades, CARB has been incrementally increasing regulations to reduce air emissions with the goal of reaching zero emissions by 2030. For Jeff Wingfield, Director of Environment and Public Affairs, and the team at the Port of Stockton, their commitment goes beyond current legal obligations to ensure a good quality of life for people in the region. “We had installed particulate filters, but a lot of equipment was outdated,” said Wingfield, “so we started having discussions about what it would take to get to zero emissions.” Considerations of cost, available technology, and identifying priorities were weighed against opportunities for funding and the recognition that, at some point, the transition would have to occur.

Those conversations, initially internal, expanded to include Joe Carrillo, Northern California Regional Vice President for terminal operator SSA Marine, and ultimately, the Ports of Oakland and Long Beach. “This project ties in with SSA Marine’s overall strategy for accelerating the use of zero-emission vehicles in Northern California,” said Carrillo. “There will be dramatic changes over the next eight years, given the 2030 goal for zero emissions. Stockton is at the forefront of making the transition and with a number of ports ready to follow suit, competition for funding programs will increase.”

The resulting partnership between the Ports of Stockton, Oakland, and Long Beach allowed the three to pursue grant opportunities offered by CARB that offered a 50/50 split of the cost of cargo handling units. “By partnering with the other ports, who brought additional resources to the table, we were able to enhance the grant program so that the Port of Stockton’s share was reduced further to 20 percent,” Wingfield said, adding that, with an annual budget of about $60 million for all of their operations, this one project alone could easily have cost upwards of $10 million. Wingfield also noted that the Port recently completed an emission inventory based on 2018 activities, their busiest year to date. “The inventory allows for better planning and budgeting for future emission reduction plans.”

Other key partners in this initiative include XL Lifts, World Forklifts, and Wiggins Lift Co., the manufacturer of the first commercially available zero-emission large capacity forklift. Representing Wiggins and World, Michael Marzahl, President of XL Lifts, the dealer for both manufacturers, worked with SSA Marine and the Port to ensure the equipment would meet their needs. “The biggest challenges for an electric forklift, especially a large capacity one, is ensuring it does not run out of charge, while making sure it meets the lifting needs at hand. This conundrum is the heavy equipment equivalent of ‘range anxiety’ experienced by the electric car industry. Both Wiggins and World have developed advanced technology to crack the ‘range anxiety’ code. As far as I know, Wiggins is the only large capacity lithium electric forklift in operation today that can run a full shift on a single charge. And the 8,000-pound capacity World forklifts, designed for all-weather use, can be used, charged and stored outdoors, even in inclement weather, like rain.”

In total, the Port of Stockton ordered 34 forklifts, two multi-function utility vehicles (DANNARs) and one railcar mover (Zephir) — all fully electric. Eighteen of the forklifts built wholly in the United States by Wiggins Lift and have a 36,000-pound lift capacity; the remaining 16 have an 8,000-pound lift capacity and are built by World Forklifts To date, 28 of the forklifts (12 with 36,000-pound capacity and 16 with 8,000-pound capacity) have been delivered with the remaining six to follow later this year.

In selecting the Wiggins forklifts, Carrillo summarized some of the key requirements to ensure operations would be able to continue as they have in the past. “We had to consider the various aspects of operations and how the electric vehicles will work in comparison to diesel — for example, battery power and if we’d be able to work two shifts without charging; also torque lifting capacity and if we’d be able to take on the same loads,” he said. For the Port of Stockton, Carrillo noted that the throughput isn’t as heavy as some of the larger container ports like Long Beach or Los Angeles, “so we have opportunities for mid-shift charging. We’ve also found that the commodities we’re moving — mostly steel or bagged rice — aren’t too heavy so weight isn’t as big a factor as it could be for other ports which may drain the battery quicker.”

For SSA Marine, they have already begun working with other port partners to start the transition to zero emissions. West Sacramento, for example, will commence deliveries of 14 Wiggins eBull forklifts toward the end of this year to continue moving to zero emissions with finalizing deliveries in September 2022.

An unintended consequence of this project has been the example it has set for other tenants at the Port. “We’ve been able to demonstrate that we are able to keep up with work cycles and loads and still be competitive,” said Carrillo. “We’re hoping that we’ve made it easier for others to see how zero-emission equipment works and hopefully, they will follow our lead.”

Technology innovation and real-world use in the field from progressive organizations like the Ports of Stockton, Oakland, and Long Beach, and SSA Marine will be key to continued adoption of electric forklifts. According to Micah McDowell, Director of Sales at Wiggins Lift, “Everyday, we are committed to making our electric forklifts more and more technologically advanced to offer better performance for our customers. This can only happen in real-world applications, by seeing how this new equipment responds to different environments and duty cycles. In addition, our zero emission forklifts are designed with the future in mind: for example, if and when hydrogen fuel cells become feasible, we can convert our existing battery electric forklifts to adopt this zero-emission alternative.”

“As the fourth busiest port in the state, it is increasingly important for us to pursue zero-emission and more efficient cargo handling equipment,” said Port Director Richard Aschieris. “These recent projects are just the start of a larger modernization effort underway leading the Port of Stockton on a path to further reduce emissions.”

While the issue of air emissions is an important one, it’s just one of the priorities the Port of Stockton has identified in its overall efforts to improve their environmental performance. Having joined Green Marine in 2019, Wingfield said the program was a big help in being able to validate their entire environmental program. “Once you’ve been certified, you need to continually work to improve operations and establish best management practices so that you’re able to maintain, and then exceed the previous level of certification.”

Other initiatives, such as converting one of the main storm ditch channels into a manufactured wetland which will then act to treat stormwater more efficiently and effectively or working with the US Fish & Wildlife Service and the US Army Corps of Engineers to re-establish habitat at a National Wildlife Refuge for an endangered butterfly and two endangered plant species, are all part of the Port’s efforts to improve the environment, something that the local community is noticing. “It shows our community that we’re committed to environmental sustainability — not just because regulations force us to but because we truly care about our surroundings.”

Looking to the future, Wingfield and his team are spending time looking at how to comply with the addition of tanker vessels and auto carriers to the At-Berth Regulation and management of exhaust. “We’ll be submitting a plan to CARB before the end of this year. Considerations include whether we address the exhaust through capture-and-control equipment or shore power, or perhaps propose other projects that would offset or mitigate the effect of the exhaust from the vessels,” Wingfield said, adding that, while the technology is attainable, there are significant costs that need to be considered to determine the best path forward.

Whichever option is pursued, the Port of Stockton has already shown they’re moving in the right direction. And that bodes w

ell for the future. 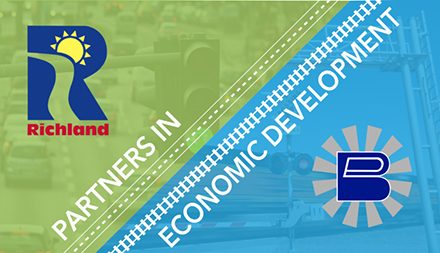 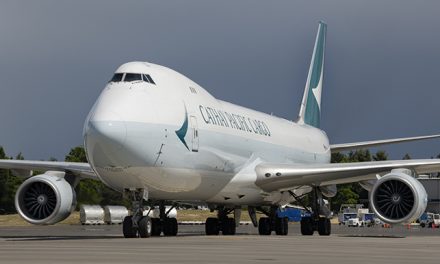