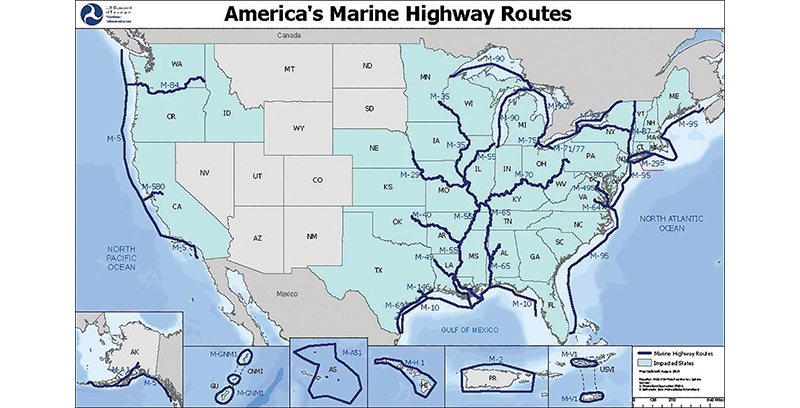 Experts are debating the likely impacts on Pacific cargo flows of President Biden’s Bipartisan Infrastructure Law, known officially as “The Infrastructure Investment and Jobs Act” (IIJA). One part of the IIJA aims to ensure a better future for the U.S. Marine Highway System.

The new law’s budget of $1.2 trillion is certainly a big one, and it’s almost certainly going to benefit the U.S. Marine Highway System. The U.S. Department of Transportation’s Maritime Administration’s (MARAD) Marine Highway system includes 28 Marine Highway routes. Each one serves as an extension to the surface transportation system. Each route is designated by the Secretary of Transportation, and each one offers relief from landside corridors suffering from traffic congestion, excessive air emissions, or other environmental challenges.

Acting Maritime Administrator Lucinda Lessley explained that “America’s Marine Highway Program is an innovative program that encourages the use of America’s navigable waterways for the movement of freight as an alternative to land-based transportation.” 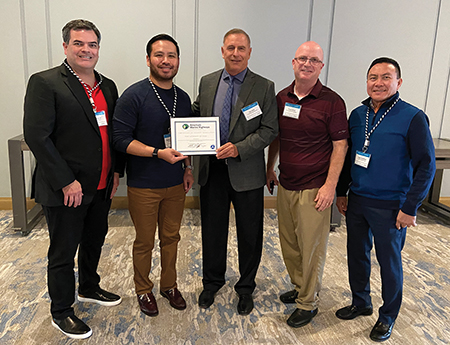 Noting the importance of such funding, U.S. Secretary of Transportation Pete Buttigieg stated, “The investments through the America’s Marine Highway Program will help us move more goods, more quickly and more efficiently. In this moment of record demand for goods and shipping, this is an important piece of the Administration’s Port Action Plan to strengthen supply chains, modernize port operations, and lower the cost of goods for American families.”

Since its inception, the AMHP has designated 52 Marine Highway Projects, bolstering jobs and local economies across the nation. Since 2016, MARAD has received $51.6 million in funding for grants under the AMHP, and a total of 44 grants have been awarded to 25 eligible marine highway projects. In addition to relieving landside congestion, these grants further improve transportation system resiliency by providing marine transportation alternatives during times of disaster or national emergency.

The primary goal for MARAD’s Marine Highway Program is to expand the use of America’s navigable waters. To accomplish this goal MARAD works with public and private organizations to develop and expand marine highway service options and facilitate their further integration into the current U.S. surface transportation system, especially where water-based transport is the most efficient, effective, and sustainable option.

What will happen on the Pacific coast sections of the AMHP?

Alaska’s U.S. Senator, Lisa Murkowski (R), served as a core member of the bipartisan senatorial group who negotiated the bill. As a result, the language of the final legislation — as signed by the President — includes multiple projects meant to benefit her state’s ferry system. For example, a sum of $250 million was set aside for a pilot program to develop an electric or low-emitting ferry. This portion of the bill does not mention Alaska, by name. But the fact is that, as the one state with the most marine highway miles, it is guaranteed to be a site for such an initiative. The Alaska Marine Highway System — which encompasses the ferries that help connect much of the state — also stands to benefit. A $1 billion program in the bill would construct a ferry system to reach rural communities, and a provision would funnel federal highway dollars toward operating and repairing the service.

The four coastal marine highway routes are the M- 5 on the West Coast; the M-10 along the Gulf Coast; the M-95 on the East Coast; the M-90 through the St. Lawrence Seaway and Great Lakes. M-55 is the north-south route through the U.S. Midwest, running the length of the Mississippi and Illinois Rivers, connecting New Orleans to Chicago.

Cary Davis is the VP of Government Relations & General Counsel at the American Association of Port Authorities. He argues that America’s Marine Highways are “still the safest, cleanest, most efficient way to move cargo – it’s a no-brainer why the Federal Government should increase its investments in its transport waterways”.

Davis, and the AAPA, consider it to be “a no-brainer to invest in a transport waterway system that takes 70 trucks off the road for every barge and yields 200-300% return in economic activity for every dollar invested”.

Some recent moves by the Federal Government made progress and will even induce the states to focus on the Marine Highway. Davis listed three of them in a recent discussion with us:

*First, the recent round of Marine Highways grants shows the government understands the power of getting cargo off congested roadways.

*Second, the expansion of Marine Highway designations – meaning who is eligible for Federal funds – will benefit lesser-served areas like Guam, Oregon, and Alaska.

*Third, the recent Bipartisan Infrastructure Law included multiple provisions that elevate the importance of Marine Highway-adjacent projects. Davis says “this has flown under the radar. States will now be required to include multimodal marine projects in their transportation plans; marine intermodal projects are now eligible for more competitive grant funds at USDOT; and Marine Highway projects are now eligible for Highway Trust Fund monies as long as they are connected to the Federal Highway System”.

USDOT Secretary Buttigieg has explicitly said Marine Highways are part of Federal planning, so ports and their partners will hold him to that great promise.

For an expert perspective we consulted Dale Sause, President of Sause Brothers Towing, since he possesses a wealth of knowledge and experience in vessel operations. Assessing the current state of the U.S. marine highways system, Sause says that, “in general, the U.S. Marine Highway system is strong and healthy. Consider the over $2 billion spent over the past decade by Tote, Crowley, Matson, and Pasha Hawaii. There have been 10 new ships built — of which eight are in operation, and two are in sea-trials — soon to be operational. Tote built two Marlin class ships starting in 2013. Crowley built two Commitment Class vessels. Matson built two Kanaloha class and two Aloha class vessels. These eight are fully operational, with four working to Puerto Rico and four sailing to Hawaii. The two Pasha vessels are on sea-trails in Texas and should be sailing soon to go into Hawaii service.

Sause added: “These state-of-the art, hydrodynamic, fuel-efficient ships incorporate many green technologies. They also clearly demonstrate the U.S. maritime operators’ commitment to their customers, to sustainability and to our environment. This commitment is further advanced by the work of the Blue Sky Maritime Coalition.”

Sause thinks that investments are needed if the U.S. is to achieve a ‘preferred future’ for the marine highways system: “U.S. marine highway operators will need to continue making significant investments in vessels which incorporate “green” technology. These vessels will require propulsion systems fueled by a variety of new fuel, such as renewable diesel, methanol, ammonia, hydrogen, and hydrogen fuel cells. Ports will need to continue modernization which will include electrification, improving rail and truck access corridors, and providing space for the fuels of the future. The government will need to focus on infrastructure, harbor maintenance, dredging and our aging locks, dams, and bridges. We will also need major investments in education and training for our future workforce.”

In pursuit of that ‘preferred future’, Sause says that “we, as a nation, have over the past several decades under-funded maintenance/improvement of our waterway infrastructure. In my opinion, the  U.S. Army Corps process — starting with Project Approval/ Authorization and continuing through to completion – should be reviewed, and improved. The goal being to streamline, guarantee funding, and assure timely project completion”.

Looking backwards:
The project led by the Ports of Oakland and Stockton

There were four primary project stakeholders:

The primary goal was to introduce a barge service between Oakland and the inland Port of Stockton that could improve mobility, reduce congestion and emissions, create system redundancy/resiliency, allow for non-standard and heavier loads, create jobs, and spur the economy. The project started operations in May 2013 as a pilot project. It was discontinued after a year due to lack of cargo availability and high operations cost. The operational cost for barge was about $1,200 compared to $600-$700 for truck. This cost overrun was due to $20,000 berthing cost for the barge. The weight limit on California highways does not allow movement of overweight containers on road. The loads must be split into multiple containers to fall under the weight limits. The Green trade corridor service can capture that cargo as barges can handle overweight containers and savings in shipping cost. The project will need specialized container barge, container cranes at the Ports of Stockton and West Sacramento, construction of container staging area at Port of Stockton, transloading facility at the Port of West Sacramento, and installation of electrical connections at Port of Oakland for cold ironing.

The green trade corridor service transported more than 7,000 containers and eliminated about 24,000 truck trips from I-580 making highway safer. The service reduced air emissions by 80 percent, which included elimination of about 6,000 tons of greenhouse gas emissions. Freedom from weight limits allowed for more cargo to be stuffed in containers, which provides cost savings in terms of shipping cost. The pilot program also created about 45 maritime jobs.

The M-580 marine highway project was a $69.3-million public-private partnership that received federal funding through the following sources: In February 2010, the Ports of Oakland, Stockton, and West Sacramento received a $30-million TIGER grant to upgrade port facilities and purchase the relevant equipment to transfer cargo. Service along the M-580 started on May 16, 2013 to carry import and export cargo, specifically agricultural products, and consumer goods, between the three ports. Initially, the service ran once a week until August 2014 when it was transitioned into an ‘as needed’ service due to poor demand. After over a year of operation, the service was essentially discontinued.

The M-5, on the West Coast, is the longest of these four routes. There are several distinct parts of the M-5 system.

The M-5 located in California, Oregon, and Washington

The M-5 located in Alaska

The M-A1 located in Alaska

The M-580 located in California

The M-84 located in Oregon, Washington, and Idaho

Gordon Feller has worked for more than four decades at the intersection of global trade and technology innovation. Upon arriving in Silicon Valley in 1983 he began work, from inside the executive suite, to develop ambitious projects aimed at solving some of the world’s most complex problems. Current and past clients include World Bank, IHS Markit, World Economic Forum, Ford Motor Co. Toyota, The Financial Times of London, The Economist Group, Apple, The Rockefeller Foundation, numerous national governments (Germany, Canada, US), Reuters, and many others.  From 2010 to 2017, he served as Director at Cisco Systems HQ. He founded Meeting of the Minds in the 1990s, stitching together a global leadership network which is enabling the adoption of new policies and systems. Gordon was appointed by the Obama/Biden White House to serve on the US Federal Comm. established by The US Congress. He currently serves as a Global Fellow at the Smithsonian Institution. Gordon sits on numerous corporate and non-profit boards.  His first published article appeared in a journal published by the World Policy Institute (NYC) in 1979. Since then he’s published 450+ magazine articles. (Twitter: @GordonFeller) 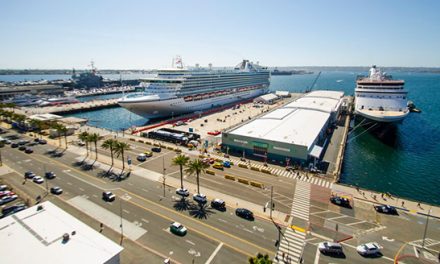 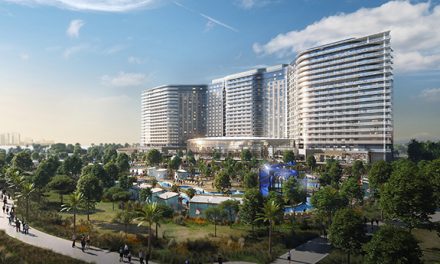