May 5, 2022 — For more than two decades, the Port of Long Beach has envisioned transforming its Pier B rail yard into a modern, high-tech on-dock rail support facility.

Now that the project has cleared the federal environmental review process, the centerpiece of the Port’s rail infrastructure improvement program can move swiftly from vision to reality.

“This milestone unlocks our access to federal funding and allows our Board of Harbor Commissioners to address the remaining local decisions needed to break ground on this critical link for expediting cargo by rail between the Port and major markets nationwide,” said Port Executive Director Mario Cordero. “The Pier B On-Dock Rail Support Facility advances all our goals for accelerating the flow of cargo: increasing on-dock rail efficiency, reducing shipping costs and shrinking the supply chain’s carbon footprint.”

“Years of planning, studies, community outreach and collaboration with numerous stakeholders have gotten us to this juncture,” said Harbor Commission President Steven Neal. “The Commission is looking forward to considering the detailed designs, right-of-way decisions and construction recommendations for a consequential project that will strengthen our nation’s freight network and Long Beach’s standing as a world-class, competitive port.”

On April 7, the U.S. Department of Transportation’s Maritime Administration issued its Record of Decision certifying the federal Environmental Impact Statement and approving the project. The finding triggers the release of $52.3 million in grant funding MARAD awarded the project in December subject to EIS approval. The federal grant is significant seed money for the first phase of the $1.547 billion program to reconfigure, expand and enhance the Port’s existing Pier B rail yard. Additionally, the Port has received grants of $26.3 million from the Los Angeles County Metropolitan Transportation Authority and the California Department of Transportation, bringing the total amount the Port has secured to date from its government partners to nearly $79 million.

The multijurisdictional buy-in reflects the importance of the Pier B On-Dock Rail Support Facility to the nation’s supply chain. The project centers on a full-service staging facility for allowing trains up to 20,000 feet long — almost 4 miles — to be assembled or broken down safely and efficiently. It also includes dedicated space for servicing locomotives and rail cars and streamlining feeder tracks to the Alameda Corridor, the superhighway for freight trains moving through metropolitan Los Angeles and connecting the San Pedro Bay ports with rest of the country.

“The new rail facility will increase velocity of on-dock rail operations throughout our Port, as well as the entire complex,” said Deputy Chief Harbor Engineer Mark Erickson. “Each time we eliminate a single bottleneck, the whole network benefits. The Pier B On-Dock Support Rail Facility will cure multiple inefficiencies on a grand scale.”

Plans call for the project to be built in 12 segments, starting with the design, contracting and construction of the first five stages from 2023 to 2026. They are the locomotive facility; westward expansion of the existing site and realignment of Pier B Street; eastward expansion of the site; relocation of a Los Angeles County flood control pump station; and widening the Dominguez Channel Bridge to accommodate a third track. The entire facility is expected to be completed by 2032. Throughout, the work will involve reconfiguring city streets for better traffic flow and repositioning utilities.

All told, the new facility will more than double the size of the existing yard, growing it from 82 acres to 171 acres. It will add more than 130,000 feet of rail, quadrupling the number of tracks from 12 to 48 sets: two main lines, five arrival/departure tracks, and 41 tracks throughout the yard for staging, storing and repairs.

A modern, expanded Pier B rail facility positions the Port to achieve its longstanding goal of moving at least 35% of cargo by on-dock rail. The purpose is both operational and environmental. By streamlining on-dock rail service, the new facility will reduce roadway congestion and the carbon footprint of the Port and the extended supply chain. “It’s a trifecta,” said Erickson. “One long double-stacked train whisking cargo from the docks to the nation’s heartland eliminates about 2,000 truck trips, which in turn improves traffic and reduces emissions.” Currently, about 22% of all cargo moving in and out of the Port is handled by on-dock rail.

The economic benefits are substantial. During construction, the project will create an estimated 1,135 jobs. When completed, the new facility will lower the cost of doing business for shippers, which will attract more cargo to Long Beach and generate additional permanent jobs.

The Pier B project has been driven by greater industry demand for on-dock rail service and regular forecasts projecting increases in containerized cargo volumes. Planning started long before the pandemic-induced surge that has since caused container throughput at the Long Beach port to reach 9.4 million twenty-foot equivalent units in 2021, an increase of more than 15% from the previous year and a historic high. “The cargo onslaught amplified existing inefficiencies,” said Erickson. “Although no one could have predicted these events, it’s clear our long-range planning is about to pay off.”

Like all major Port redevelopment projects, the Pier B On-Dock Rail Support Facility will augment the Port’s Community Grants Program. The grants fund local health public health and environmental projects to mitigate port-related impacts on air and water quality, traffic and noise. Since 2009, the Port has committed more than $65 million to the program, including $1.55 million from the Pier B project, and awarded more than $30 million in grants.

PROGRESS AND NEXT STEPS

In addition to securing initial funding for the Pier B On-Dock Rail Support Facility, the Port has done extensive preparation in anticipation of construction. To date, the Port has finalized the state-required environmental impact report, which the Board of Harbor Commissioners certified in 2018; developed preliminary design packages for the first five phases; collaborated with utilities and agencies on plans to relocate electrical, water and gas lines; and held quarterly public outreach meetings since fall 2020 to keep the community informed about the project, answer questions and get feedback. Ongoing communication efforts include outreach to Wilmington residents and businesses and Los Angeles city officials about the portion of the existing rail yard already located within L.A. city limits and plans to expand it.

The immediate next steps include securing two coastal development permits, one from Los Angeles and another from the California Coastal Commission, for which the Port’s applications are pending. The Port can now also move forward with acquiring multiple privately owned properties to assemble the acreage for expanding the rail facility. All are either industrial or commercial, and the process includes relocation assistance.

In the coming weeks, the Board of Harbor Commissioners will be asked to consider the project’s budget. In February, they were advised the $1.547 billion price tag represents an 80% increase from the 2018 estimate. The same forces driving up costs in every sector, namely inflation and price escalation, are in play. “Concrete drainage pipes alone have gone up 45%, and that’s just one example of the higher cost of construction materials,” said Erickson. So is the region’s real estate market, which has heated up in recent years, he added. “In Southern California, prices have doubled and continue to climb.”

Also, elements of the project have been upgraded. Enhancements include replacing existing tracks that originally would have remained. “They will be more than 30 years old when the new tracks are laid,” Erickson said. “Full replacement will ensure a high-capacity, high-efficiency facility that won’t require major maintenance within the first few years.”

Contingencies and soft costs are calculated based on a percentage of the total, so what the Port must set aside for those expenses has also increased. To ensure the new estimate is reliable, the Port brought in a third party to review the numbers.

One silver lining of the pandemic is it brought the importance of a strong supply chain to the fore. How goods move and the need to improve America’s freight network now has widespread attention from the halls of Congress to the folks at home. This deeper understanding led to the passage of the 2021 infrastructure law, which will fund more than $1 trillion in port, airport, roadway and rail improvements throughout the U.S. Likewise, California Gov. Gavin Newsom has proposed $4.9 billion to improve the state’s transportation infrastructure. “Investment is starting to catch up with need,” Cordero said. “Pier B is a transformative project for the entire nation.” 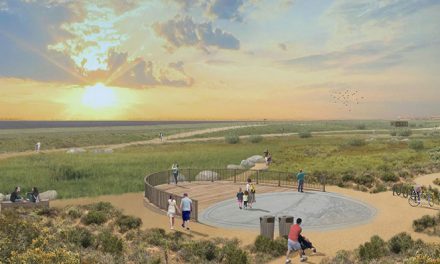 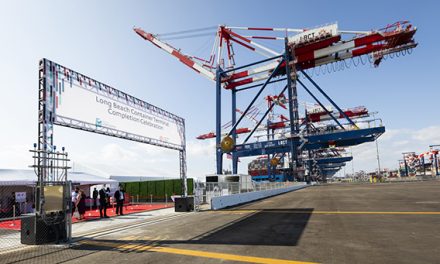 Long Beach Container Terminal: The making of a state-of-the-art terminal 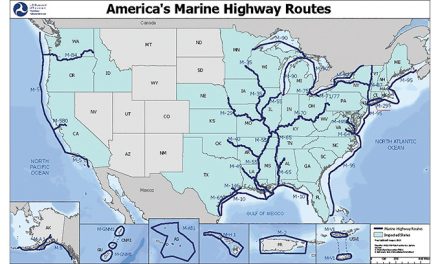