Long Beach Container Terminal: The making of a state-of-the-art terminal

“They were wrong,” said Steven Neal, President of the Long Beach Board of Harbor Commissioners.

Long Beach Container Terminal and the Port held a grand opening Aug. 20 to celebrate the completion of the Middle Harbor Redevelopment Project. The modernization project has transformed two aging terminals into one of the world’s most technologically advanced container terminals.

Long Beach Container Terminal at Middle Harbor is a 300-acre facility powered almost entirely by electricity that can handle up to 3.3 million TEUs (twenty-foot equivalent units) annually. On its own, it would rank as America’s sixth-busiest container port.

“This engineering marvel sets a new standard for international shipping, goods movement and many other industries, said Port Executive Director Mario Cordero. “It is a global model of efficiency and sustainability.”

From concept to construction, LBCT and the Port partnered to develop this state-of-the-art terminal. The process has taken about the same number of years it takes a student to get from preschool to college, with LBCT functioning as a working terminal the whole time. “We chose to do the right thing the right way. We can proudly and confidently state we are the cleanest container terminal in North America,” said LBCT CEO Anthony Otto.

Built in three phases, Long Beach Container Terminal at Middle Harbor represents an investment of nearly $1.5 billion in infrastructure by the Port and another $700 million in cargo handling equipment, highly sophisticated computer and software systems, and workforce training by LBCT. Now that the final phase is opening, LBCT has more than double the capacity of the two terminals it replaced.

“Efficiency is everything,” said Otto. “We designed the yard so that we can move more TEUs per acre.” While a traditional container terminal typically handles 6,000 to 8,000 TEUs per acre, the ultramodern LBCT facility can process 12,000 to 15,000 TEUs per acre. “It makes us, the Port of Long Beach and every link in our supply chain more competitive.”

Highlights include a 4,200-foot long wharf where up to three 14,000-TEU ships can plug into shore power and be worked simultaneously; 14 of the world’s first tandem-lift dual-hoist ship-to-shore cranes, each of which can discharge or load four TEUs at the same time and handle up to 35 container moves per hour; 102 electrified automated guided vehicles that transport containers between the docks and the yard; and 72 electric automatic stacking cranes that manage container staging, priorities and movements. Next-generation technology streamlines container moves by allowing the terminal to stage and stack inbound, outbound and empty containers together; and advanced computer systems optimize every move each piece of equipment makes in coordination with every other piece of equipment.

Long Beach Container Terminal at Middle Harbor also has the on-dock rail yard capacity to move more than 1 million TEUs annually. Consisting of eight working tracks and four storage tracks operated by five rail mounted electric gantry cranes, the rail yard is one of the world’s largest, where over 1-mile-long trains can be built on-site, allowing up to 35% of containers to be transported by rail. On the trucking side, the terminal has two gates, 37 dedicated truck lanes with kiosk connectivity to the terminal’s service system, and space for additional staging to avoid traffic congestion and bottlenecks.

Cargo owners also love to have their goods fly through the supply chain and reach their customers swiftly and safely. LBCT incorporates precisely the kind of smart technology and innovation that address the critical needs of port retail customers relying on the supply chain to get their finished goods to market and components to manufacturers.

“The Long Beach Container Terminal at Middle Harbor is a great example of the kind of modernization that is needed at our nation’s ports,” said Jess Dankert, Vice President of Supply Chain for the Retail Industry Leaders Association. Based in Washington, D.C., RILA represents more than 200 retailers, product manufacturers, and service suppliers with more than $1.5 trillion in annual sales that support millions of American jobs and more than 100,000 stores, manufacturing facilities, and distribution centers in the U.S. and abroad. “The efficiencies created here will have positive ripple effects throughout supply chains.”

The key to improving the flow of cargo is adding capacity, which the Port of Long Beach and LBCT have succeeded in doing using groundbreaking technology, said global trade economist Dr. Walter Kemmsies of The Kemmsies Group. “New technologies had to be invented to make LBCT work. This terminal is a serious achievement for the economy, international trade and the environment.”

Although LBCT has not been immune from the delays during the post-pandemic cargo surge, modernization has positioned it to weather the storm better than most, Otto said. “The new technology has already proven itself many times over.”

Nearly 200 pieces of cargo handling equipment – ship-to-shore cranes, automated guided vehicles, and stacking cranes – run entirely on electricity and make up the largest zero-emissions fleet on any marine container terminal in the world. The only diesel equipment LBCT uses is a small fleet of yard tractors, the cleanest available Tier 4 models, to transport containers to and from the on-dock rail yard. LBCT deployed the tractors because their zero-emissions counterparts have yet to become commercially available. Meanwhile, Long Beach Container Terminal at Middle Harbor is serving as a testing ground for all-electric utility tractor rigs and an all-electric top handler.

The Port’s environmental policies and mitigation measures shaped the framework for the new terminal’s cleanest available equipment and sustainable operations. Middle Harbor’s environmental impact report was prepared during the creation and adoption of the 2005 Green Port Policy and the original 2006 Clean Air Action Plan. The lease was finalized in 2012 in the wake of the 2010 CAAP Update.

“The operative word in CAAP is action,” said Rick Cameron, the Port’s Deputy Executive Director of Planning and Development. “CAAP was never supposed to be just some plan that says we’re going to have some policies. The accomplishment is that we are keeping our commitment.”

As the Port’s first comprehensive terminal redevelopment project in the wake of its environmental covenants, Middle Harbor was the test case for how to move forward to balance business and sustainability. The project’s successful completion represents change that goes way beyond clean infrastructure and equipment, added Cameron. “It changed how we analyze projects, how we negotiate leases, how we engage with the industry, other agencies and the community.”

Given the amount of power the terminal needs, mitigation measures included those aimed at reducing energy consumption. LBCT invested in cranes that have regenerative power capabilities on down cycles and solar panels throughout the facility. Also, vessels calling at the terminal are required to use low-sulfur fuel, reduce vessel speeds to 12 knots within 40 nautical miles of Point Fermin, and plug in 100% of container ships at berth to shoreside electric power – a lease condition more stringent than California’s requirement to plug in 80% of all container, cruise and refrigerated or reefer vessels at the state’s largest ports.

By investing in all-electric automated guided vehicles, LBCT went above and beyond the emissions reduction measures stipulated in the project’s environmental impact report and incorporated into the terminal’s lease. “We were required to meet environmental standards higher than anyone else in the country and we embraced it,” said Otto, who praised the leadership and vision of LBCT’s longtime owner, OOCL, for accepting the challenge of creating a near zero-emissions terminal. Midway through construction, China COSCO Shipping acquired OOCL, which forced the 2018 sale of LBCT. The new owner, Macquarie Infrastructure Partners, shares OOCL’s commitment to the environment, said Otto. “A very good company bought a very good terminal and continues to invest in zero-emissions operations. This includes buying four more electric ship-to-shore cranes and another electric on-dock rail crane.”

In the decade it took to build the terminal, the first step was to ensure the reliability of the electricity needed to keep systems running. These systems include shore power, almost all container handling equipment, and all the internal electronic terminal operating systems. “We worked with the power provider, Southern California Edison, to build a dedicated 112MVA substation for the terminal,” said Tom Baldwin, Director of Program Management in the Port’s Engineering Services Bureau. The substation’s capacity is enough to power 16,000 2,000-square-foot homes.

Energy resiliency is a crucial, so the Port worked closely with the utility and LBCT to create redundant systems throughout the terminal.  Also, the substation’s cutting-edge, energy-efficient equipment ensures that about half of its capacity is available for future electrification projects throughout the Port.

While all LBCT’s cranes and off-road vehicles are next-generation versions of traditional cargo handling equipment, one terminal feature is entirely new: the battery exchange and charging building. The three-story structure is where each automated guided vehicle swaps out its spent 12-ton battery for a fully charged one. The automated exchange takes about five minutes, allowing the vehicle to immediately return to service while the used battery gets the full 8 hours it needs to recharge.

“This is the largest battery exchange building in the world,” said Otto, who fields regular requests from engineers, environmental planners and policymakers to tour the facility that charges up to 70 batteries at a time. “This project perfected the technology.”

Five structures on the site are built to gold Leadership in Energy and Environmental Design standards for sustainable design, construction and use, which include water and energy conservation and reuse of recycled materials. Four have already earned gold LEED certification: two operations buildings, the crane maintenance facility and the chassis repair shop. Gold certification is pending for the fifth structure, LBCT’s administration building.

All of the above has become paramount to the retail industry, investors, and corporations in general. Many have their own environmental, social and governance mandates, known as ESGs, Kemmsies said. “Big companies like Target and Walmart are telling their suppliers they need to know how much carbon they are putting in the air because they want to tell their customers they have the lowest carbon footprint. Electrification is part of the process of becoming carbon-neutral.”

Middle Harbor is also driving economic growth beyond the Port. The additional cargo moving through the terminal is generating an estimated 14,000 new jobs across the nation. The new terminal is proof that the port industry can increase efficiency, reduce pollution and boost the economy. “We’ve shown it can be done,” said Otto. “We are almost a decade ahead of where the Port of Long Beach and California want all marine container terminals to be in 2030.” 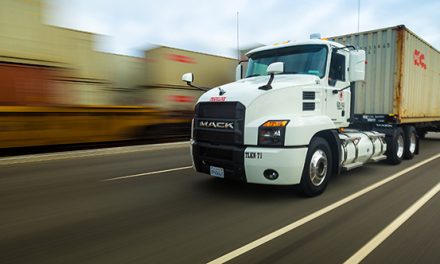 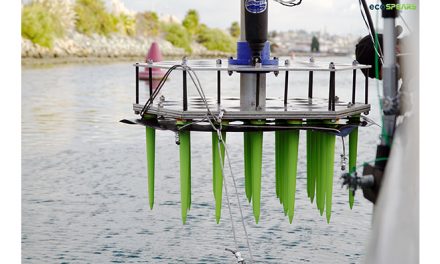 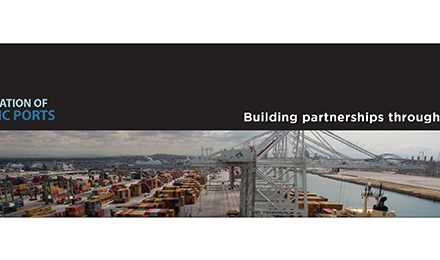